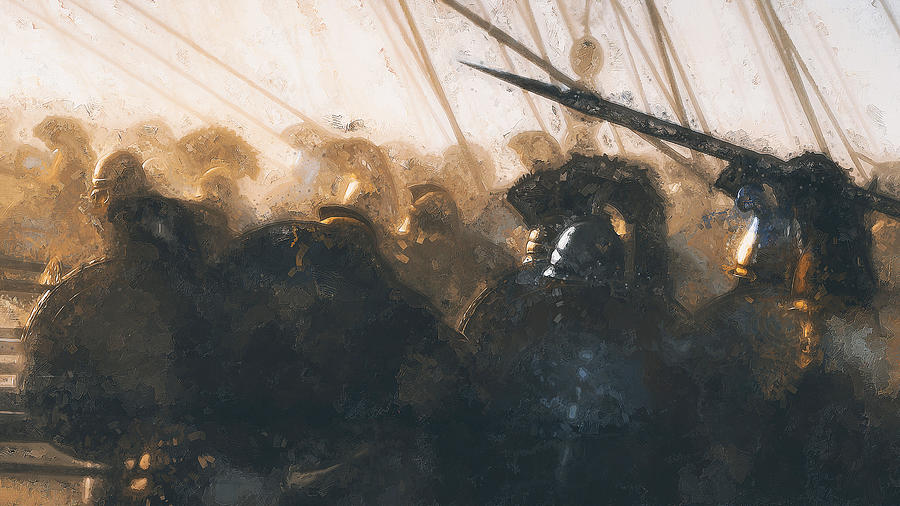 The Macedonian phalanx was a particular formation of the army of the Kingdom of Macedonia, introduced by the sovereign Philip II of Macedonia, father of Alexander the Great, during his radical reform of the armed forces.

The hypaspistai (ὑπασπισταὶ τῶν ἑταίρων, hupaspistaì tỗn hetaírôn or "bearers of the companions' shields"), were a body of elite hoplites. Protected by armor, they wore the heavy Greek shield, the aspis, and were armed with pike and sword. They were divided into chillers of a thousand men.
The pezeteri composed the ranks of tàxis (τὰξις), the heart of the phalanx. They were protected by heavy armor, complete with greaves, and armed with the long Macedonian pike, the 5-7 m. Sarissa, which forced the soldiers to carry the shield on the left shoulder. The ranks were divided into smaller chialiarchs than the hypaspistai.
The deployment of the phalanx was rectangular, facing the enemy: the long sarisses of the first rows were placed horizontally in front of the phalanx, while those of the most backward companions were held up and lowered only at the moment of impact with the enemy, when the phalanx files were compressed. In this way, a phalanx ready to fight assumed the appearance of a giant porcupine: during the assault the first ones would be hit the enemy and forced who could avoid them to stay in the middle of their rods, providing the sarisses of the rows behind the targets fixed on which to concentrate. Crushed against each other, the men of the tàxis protected each other with the shields worn on their shoulders.

The main defect of the Macedonian heavy infantry deployment was the vulnerability to the flanks. The task of the hypaspistai was precisely to protect the flanks of armed soldiers of saris or other light weapons by exploiting their greater rapidity for the actions of disturbance with bullets or in body-to-body. Further protection was ensured by the very mobile cavalry of the etèri, usually positioned at the sides of the Macedonian lineup.

The defeat of the Theban phalanx by the Macedonians of Philip in the Battle of Chaeronea (338 BC) proved the supremacy of the Macedonian army on the conventional alignments of the classical world.

During the Battle of the Granicus (334 BC), during the conquest of Asia Minor, Alexander's tactic was to open gaps in the enemy infantry, leaving space for the cavalry to break the Persian army (which was arranged along the steep banks of the river), allowing the Macedonian phalanx to load with saris, ending the battle.

This type of phalanx was reused, with minor adjustments from the diadochi and remained the basic training in almost the entire Hellenic world. This tactic was extremely effective against disorganized infantry and cavalry. Moreover, there was no tendency, unlike the normal Greek phalanx, that the men of the left flank advanced by bending the formation. The Macedonian phalanx, after some victories against Rome, was however defeated in the Battle of Pidna; the legions exploited their superior mobility to get around the Macedonian phalanxes and attack them laterally or in the uncovered points: in fact the phalanx, to chase the Roman soldiers, had unpacked remaining uncovered in the flanks and had pushed on a hilly terrain on which it was practically impossible keep training. This defeat marked the decline of the phalanx, now too dissimilar to that of Alexandria, and the rise of the now more versatile Roman legion.