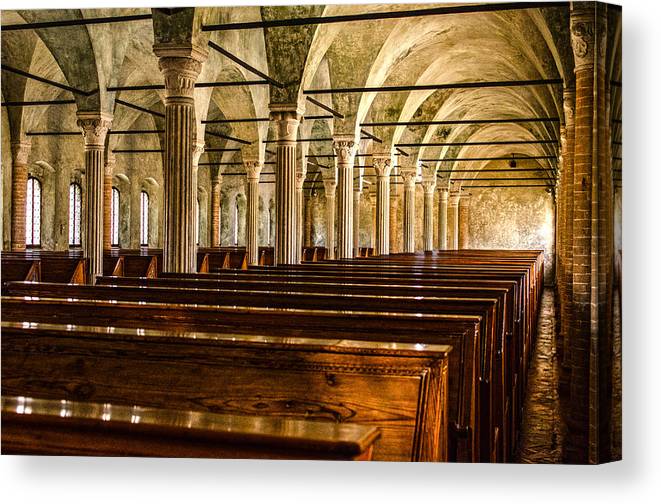 The Name of the Rose - HDR Canvas Print

The Name of the Rose - HDR canvas print by AM FineArtPrints.   Bring your artwork to life with the texture and depth of a stretched canvas print. Your image gets printed onto one of our premium canvases and then stretched on a wooden frame of 1.5" x 1.5" stretcher bars (gallery wrap) or 5/8" x 5/8" stretcher bars (museum wrap). Your canvas print will be delivered to you "ready to hang" with pre-attached hanging wire, mounting hooks, and nails.

The Name of the Rose - HDR by Andrea Mazzocchetti... more

Congrats on your sale!

Congratulations on your sale.

Congrats on your recent sale! L/F

The Name of the Rose - HDR by Andrea Mazzocchetti The Malatestiana Library (Italian: Biblioteca Malatestiana), also known as the Malatesta Novello Library, is a public library in Cesena, Emilia-Romagna (Italy). It was the first European civic library, belonging to the Commune, rather than the church, and open to the public. The Malatestiana Library is the only one in the world, of the type called humanistic-conventual, which has preserved structure, fittings and codexes since its opening for more than 550 years. The main doorway was the work of Agostino di Duccio (1418-1481). The wonderful walnut door dates back to 1454 and was carved by Cristoforo da San Giovanni in Persiceto.