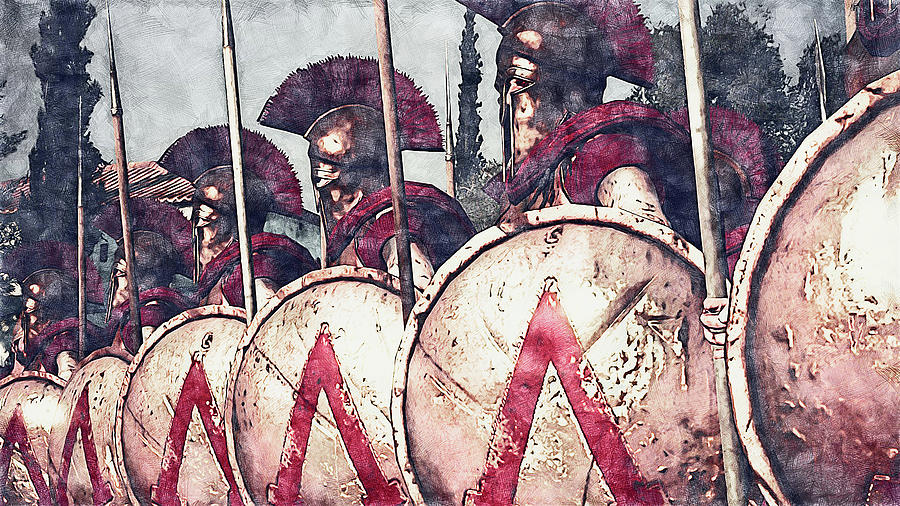 The Spartan army was the armed organization of the city-state of Sparta.

It is still valued today for its ethics and its moral rigor: those who were military in Sparta had to be an example for the community. In the heyday of Sparta (between the sixth and fourth centuries BC), it was said that "a Spartan soldier was worth many more men than any other army". The strength of the Spartan army was essentially founded on the system of alliances because the army could not rely only on the limitedness of human resources.

The Spartan army did not fight to conquer, to make loot, to expand its territory (also because it would not have had the strength to control it). Courage was one of the main strengths for the Spartans.

The boys and girls were looked after by their father and women until the age of seven, after which the boys were sent to the so-called Agelaia. At the beginning of the course they were trained to resist deficiencies and difficult situations.

At the age of twelve, physical education was intensified, the discipline was much more severe and the children were overwhelmed with many jobs. They always had to walk barefoot and wearing only a cloak (both in winter and in summer). At the age of 18, the most promising youngsters became the coaches of the youngest, while at the age of 20 they could be chosen for military service. From now on, even in the case of marriage, they would usually live up to 30 years in the militia barracks (Sissizi) to which they were assigned. The obligation of military service lasted up to 60 years, but in times of crisis some returned to military service despite having passed this age.

Completed the training, the Spartan had the right to take a seat in the common cafeteria where every citizen had to consume a daily meal, from the beginning of active military service to leave, the sissizio (συσσίτιον): in each of these cafeteria they took place 15 men plus their officer. From the fusion of the components of two sissizi took shape the fundamental nucleus of the Spartan army, the enomotia (ενωμοτια): this basic cell was composed of 32 men, including two officers, the eldest of whom took command, assuming the office of enomotarco (ενωμοτάρχος). Thus, grouped together in enomnia, men who had developed deep bonds of friendship, due to a daily cohabitation, lined up side by side. This factor could prove to be an advantage, since in this way the phalanx cohesion developed, but it could also cause the perfect mechanism on which the Spartan war machine was based to be jammed: the immediate replacement of the fallen of the first line. The almost automatic execution of this process was the pride of the Lacedaemon army, and it would have been made more difficult if the combatants had tendencies to succor a companion rather than another. Therefore it was avoided to gather blood relatives in the enomnia, and the components of a sissizio were interwoven with those of another.