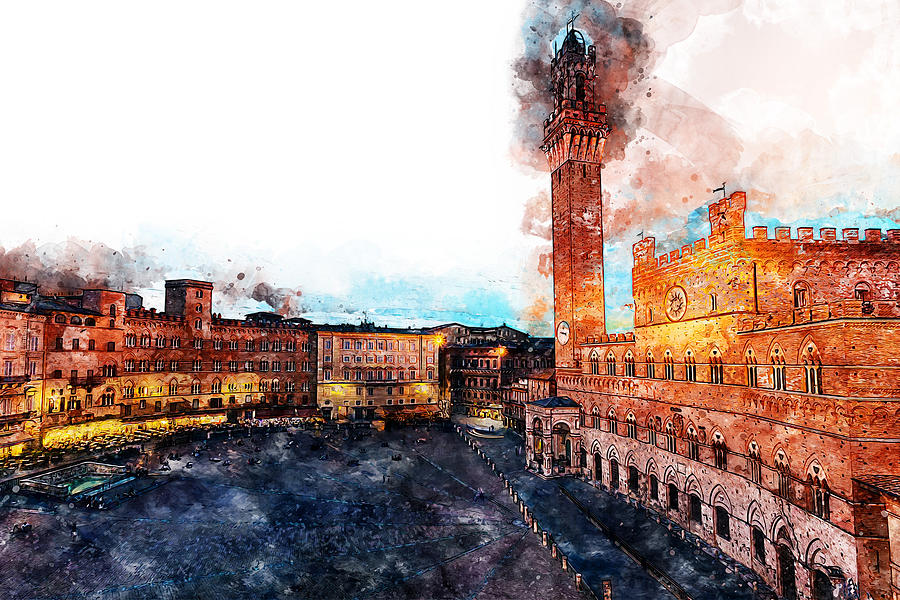 Piazza del Campo is the main square of the city of Siena. Unique for its particular and very original shell shape, it is renowned all over the world for its beauty and architectural integrity, as well as being the place where the Palio di Siena takes place twice a year. For an ancient convention, the square and the Palazzo Pubblico do not belong to any district.
The space that would become the current square was, at the origins of Siena, a reclaimed land to allow the flow of rainwater, as a semicircular head of the Montone valley, between the Santa Maria hill and the ridge that goes towards Porta Romana. The nucleus of the city in formation was located higher up, in the area of ​​Castelvecchio and the future "Campo" was a market space, just side to the main roads of communication that passed through the city and located exactly at a crossroads. Here, the routes leading to Rome to the south-east, the sea to the south-west and Florence to the north are still to be found today.
The history of the square is strongly intertwined with that of the construction of the Palazzo Comunale, or Palazzo Pubblico, which overlooks it.
The square is located at the nodal point where the three main streets of the Terzi branch off, distinguishing itself as a unit of sublime harmony, the highest fruit of the Sienese passion for beauty, manifested precociously by the people even before the famous statute of 1262 dedicated to urban planning and urban aesthetics. This makes it one of the highest creations of medieval urban planning.
The shape of the square is hemicyclic, resembling a shell valve tilted towards noon, with nine segments defined by white bands on the terracotta flooring. Enclosed by the almost continuous curtain of buildings, there are eleven passages (once twelve) spread out, skilfully masked by the use of vaults and by the arrangement on several levels of the inhabited area [3]. The geometry appears to be wisely conjugated with the shape of the territory, coming to translate the peculiarities of the place in a designed environment. The fulcrum of the entire square is the Palazzo Pubblico, which scenographically closes the space downstream and towards which all the visual lines, the differences in height, the building curtains and the flooring converge, enhancing its symbolic value.
The circumference of the square is 333 meters and is divided into two areas: "low", the central basin and to the south, paved with bricks arranged "knife" and divided into nine sections, and the curtain around, paved. The number nine would evoke the Government of the Nine.

Congratulations on your sale! :)