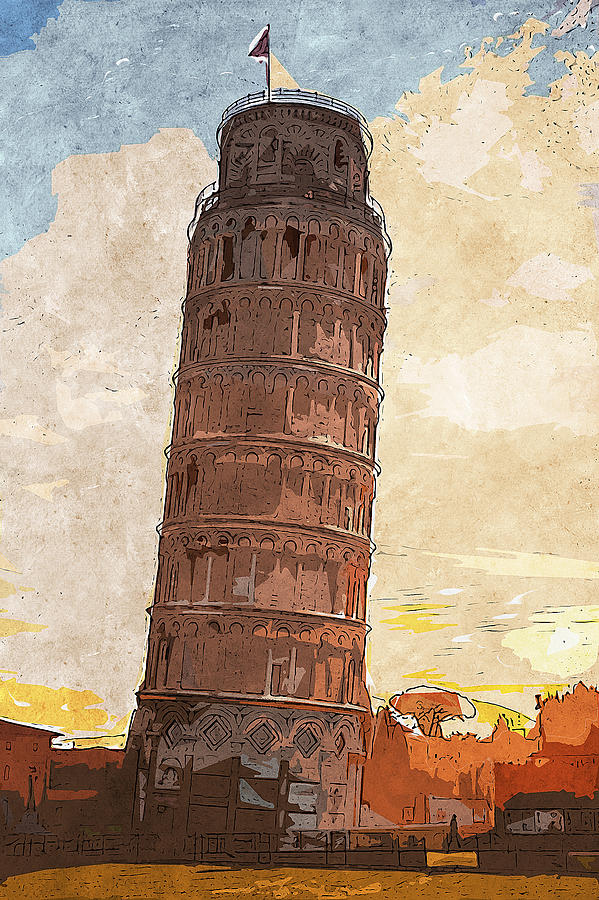 The Leaning Tower of Pisa is the bell tower of the cathedral of Santa Maria Assunta, in the famous Piazza del Duomo of which it is the most famous monument because of the characteristic slope, symbol of the city and among the iconic symbols of Italy. It is a 57-meter-long bell tower in its own right (58.36 meters considering the foundation plan) built over two centuries, between the twelfth and the fourteenth century. With a mass of 14.453 tons, the curved line predominates, with blind arches and six floors of loggias. The slope is due to a subsidence of the underlying land that occurred already in the early stages of construction.

The inclination of the building measures 3.9 ° with respect to the vertical axis. The tower is managed by the Opera della Primaziale Pisana, which manages all the monuments of the Piazza del Duomo in Pisa. It has been proposed as one of the seven wonders of the modern world. Since its construction, the overhang has substantially increased, but over the centuries there have also been long periods of stability or even slope reduction. During the nineteenth century the bell tower was affected by important restorations, which led, for example, to the isolation of the base of the tower. The works, carried out under the direction of Alessandro Gherardesca, contributed to definitively debunking the theory, supported by some scholars of the time, according to which the bell tower would have been thought to have been hanging since its origin.

Since March 2008, the tower has reached the final level of consolidation from the angle of inclination, which again stood at 3.97 °, with a displacement at the top of the bell tower of almost half a meter, a value that should remain unchanged for at least another 300 years. The success of the operation is linked to the name of Michele Jamiolkowski, professor of the Polytechnic University of Turin and president of the International Committee for the Safeguarding of the Tower of Pisa from 1990 to 2003, to that of Carlo Viggiani, professor of the University's Geotechnical Engineering Department of the Studies of Naples Federico II and president of the international Committee for the conservation of monuments and historical sites and to that of the engineer John Boscawen Burland, professor of the Civil Engineering Department of the Imperial College of London.

Warm congratulations on your great art and this sale!

Congratulations on your sale of this wonderful artwork! F/L

Congratulations on your sale! :)